Two variables in Python have the same id:

If I take two lists:

according to this link Senderle answered that immutable object references have the same id and mutable objects like lists have different ids.

So now according to his answer, tuples should have the same ids – meaning:

Ideally, as tuples are not mutable, it should return True, but it is returning False!

What is the explanation?

Immutable objects don’t have the same id, and as a mater of fact this is not true for any type of objects that you define separately. Generally speaking, every time you define an object in Python, you’ll create a new object with a new identity. However, for the sake of optimization (mostly) there are some exceptions for small integers (between -5 and 256) and interned strings, with a special length –usually less than 20 characters–* which are singletons and have the same id (actually one object with multiple pointers). You can check this like following:

And for a custom object:

Also note that the is operator will check the object’s identity, not the value. If you want to check the value you should use ==:

And since there is no such optimizational or interning rule for tuples or any mutable type for that matter, if you define two same tuples in any size they’ll get their own identities, hence different objects:

It’s also worth mentioning that rules of “singleton integers” and “interned strings” are true even when they’ve been defined within an iterator.

* A good and detailed article on this: http://guilload.com/python-string-interning/

An immutable object is simply an object whose state cannot be altered; and that is all. When a new object is created, a new address will be assigned to it. As such, checking if the addresses are equal with is will return False.

The fact that 1 is 1 or "a" is "a" returns True is due to integer caching and string interning performed by Python so do not let it confuse you; it is not related with the objects in question being mutable/immutable.

*Empty immutable objects do refer to the same object and their isness does return true, this is a special implementation specific case, though.

Take a look at this code:

In order to figure out why a is c is evaluated as True whereas a is b yields False I strongly recommend you to run step-by-step the snippet above in the Online Python Tutor. The graphical representation of the objects in memory will provide you with a deeper insight into this issue (I’m attaching a screenshot). 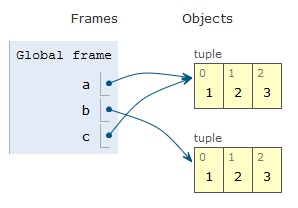 Check below code..
tupils a and b are retaining their older references(ID) back when we have assigned their older values back. (BUT, THIS WILL NOT BE THE CASE WITH LISTS AS THEY ARE MUTABLE)

**Check the link Why don’t tuples get the same ID when assigned the same values?
also after reading this. Another case also been discussed here.