[Solved] How to upgrade PowerShell version from 2.0 to 3.0

The OS that I am using is Windows 7, and the PowerShell version that is installed here is 2.0. Is it possible for me to upgrade it to version 3.0 or 4.0?

Because there are cmdlets that version 2.0 can’t recognize.

Download and install from http://www.microsoft.com/en-us/download/details.aspx?id=34595. You need Windows 7 SP1 though.

The latest PowerShell version as of Sept 2015 is PowerShell 4.0. It’s bundled with Windows Management Framework 4.0. 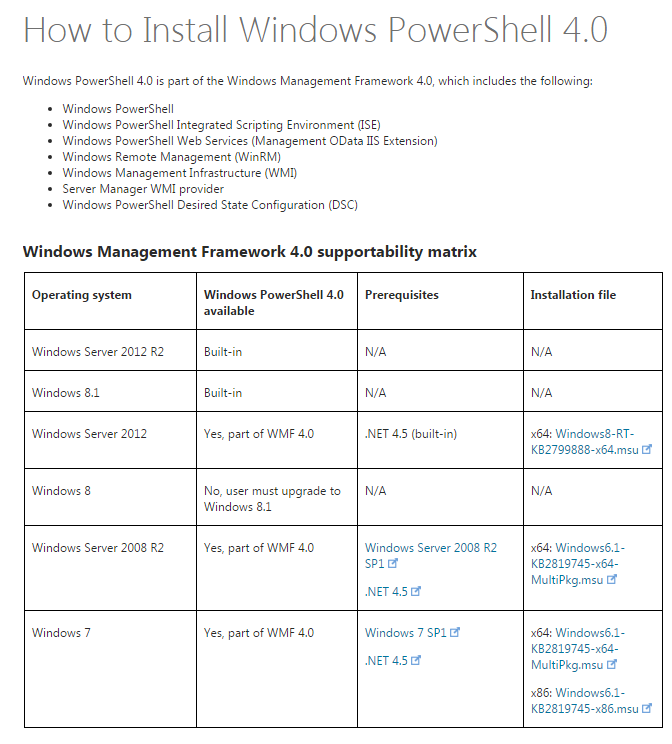 Just run this in a console.

It installs the latest version using a Chocolatey repository.

Originally I was using command cinst powershell 3.0.20121027, but it looks like it later stopped working. Since this question is related to PowerShell 3.0 this was the right way. At this moment (June 26, 2014) cinst powershell refers to version 3.0 of PowerShell, and that may change in future.

See the Chocolatey PowerShell package page for details on what version will be installed.

As of today, Windows PowerShell 5.1 is the latest version. It can be installed as part of Windows Management Framework 5.1. It was released in January 2017.

Some of the new and updated features in this release include:

The latest PowerShell version as of Aug 2016 is PowerShell 5.1. It’s bundled with Windows Management Framework 5.1.

Here’s the download page for PowerShell 5.1 for all versions of Windows, including Windows 7 x64 and x86.

It is worth noting that PowerShell 5.1 is the first version available in two editions of “Desktop” and “Core”. Powershell Core 6.x is cross-platform, its latest version for Jan 2019 is 6.1.2. It also works on Windows 7 SP1.

do use the links above. If you run into error “This update is not applicable to your computer. ” then make sure you are in fact using the right file for your os. for example i tried running windows 2012 server from that link on windows 7 service pack 1 and I got the above error so be sure to use the right zip. If you don’t know which os you have then go to start and system and it should pop right up This should be self explanatory but

Respondent: Samuel Wakeman
The answers/resolutions are collected from stackoverflow, are licensed under cc by-sa 2.5 , cc by-sa 3.0 and cc by-sa 4.0 .