I’ve never fully wrapped my head around encoding and decoding unicode to other formats (utf-8, utf-16, ascii, etc.) but I’ve reached a wall thatis both confusing and frustrating. What I’m trying to do is print utf-8 card symbols (♠,♥,♦,♣) from a python module to a windows console. The console that I’m using is git bash and I’m using console2 as a front-end. I’ve tried/read a number of approaches below and nothing has worked so far. Let me know if what I’m doing is possible and the right way to do it. 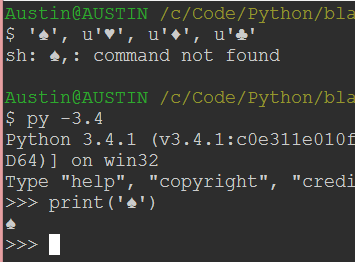 I feel like I’m missing a step or not understanding the whole encode/decode process. I’ve read this, this, and this. The last of the pages suggests wrapping the sys.stdout into the code but this article says using stdout is unnecessary and points to another page using the codecs module.

I’m so confused! I feel as thought quality documentation on this subject is hard to find and hopefully someone can clear this up. Any help is always appreciated!

What I’m trying to do is print utf-8 card symbols (♠,♥,♦,♣) from a python module to a windows console

Other encodings that can reproduce the characters ♠♥♦♣ are Windows code page 850 and 437, which your console is likely to be using under a Western European install of Windows. You can print ♠ in these encodings but you are not using UTF-8 to do so, and you won’t be able to use other Unicode characters that are available in UTF-8 but outside the scope of these code pages.

In Python 3 this is the same as the print('♠') test you did above, so there is something different about how you are invoking the script containing this print, compared to your py -3.4. What does sys.stdout.encoding give you from the script?

To get print working correctly you would have to make sure Python picks up the right encoding. If it is not doing that adequately from the terminal settings you would indeed have to set PYTHONIOENCODING to cp437.

print can only print Unicode strings. For other types including the bytes string that results from the encode() method, it gets the literal representation (repr) of the object. b'xe2x99xa0' is how you would write a Python 3 bytes literal containing a UTF-8 encoded ♠.

If what you want to do is bypass print‘s implicit encoding to PYTHONIOENCODING and substitute your own, you can do that explicitly:

This will of course generate wrong output for any consoles not running code page 437 (eg non-Western-European installs). Generally, for apps using the C stdio, like Python does, getting non-ASCII characters to the Windows console is just too unreliable to bother with.

Since Python 3.7.x, You can reconfigure stdout :

Do not encode to utf-8; print Unicode directly instead:

See how to print Unicode to Windows console.

By default, the console in Microsoft Windows only displays 256 characters (cp437, of “Code page 437“, the original IBM-PC 1981 extended ASCII character set) as you say in comments.

and in other side the PYTHONIOENCODING is set to UTF-8 by default. so i think when you want to print unicode in windows you have to align sys.stdout.encoding and PYTHONIOENCODING with together !

also note that when you specify an encoding for your .py file it just use it for that code and dont change the default system encoding.

You can look at it this way. A string is a sequence of characters, not a sequence of bytes. Characters are Unicode codepoints. Bytes are just numbers in range 0–255. At the low level, computers work just with sequences of bytes. If you want to a print a string, you just call print(a_string) in Python. But to communicate with the OS environment, the string has to be encoded to a sequence of bytes. This is done automatically somewhere under the hoods of print function. The encoding used is sys.stdout.encoding. If you get an UnicodeEncodeError, it means that your characters cannot be encoded using the current encoding.

As far as I know, it is currently not possible to run Python on Windows in a way that that the encoding used is capable of encoding every character (as UTF-8 or UTF-16) and both assumed by Python and really used by the OS environment for both input and output. There is a workaround – you can use win_unicode_console package, which aims to solve this issue. Just install it by pip install win_unicode_console, and in your sitecustomize import it and call win_unicode_console.enable(). This will serve as an external patch to your Python installation ragarding this issue. See the documentation for more information: https://github.com/Drekin/win-unicode-console.