Our workflow is such. We have a branch called dev which I can reach at origin/dev. When we do changes, we create a branch off dev:

Now I have a branch called FixForBug which is tracking (I think that’s the right word) origin/dev. Thus, if I do a git pull it’ll bring in new changes from origin/dev which is great. Now, when I’m finished with my fix, I push to a remote branch called the same thing.

First I pull down any changes from origin/dev and do a rebase:

Then I push the changes to a remote branch of the same name:

Now, there’s a branch on the remote server and I can create a pull request for that change to be approved and merged back in to the dev branch. I don’t ever push anything to origin/dev myself. I’m guessing this is as pretty common workflow.

The first time I do a git push, it works fine and creates the remote branch. However, if I push a second time (let’s say during code-review, someone points out a problem), I get the following error:

error: failed to push some refs to
‘https://github.mydomain.info/Product/product.git’
hint: Updates were rejected because the tip of your current branch is behind its remote counterpart. Integrate the remote changes (e.g. hint: ‘git pull …’) before pushing again.
See the ‘Note about fast-forwards’ in ‘git push –help’ for details.

However, if I do a git status it says I’m ahead of origin/dev by 1 commit (which makes sense) and if I follow the hint and run git pull, it says everything is up to date. I think this is because I’m pushing to a different branch than my upstream branch. I can fix this issue by running:

Why is -f required in this scenario? Usually when you’re forcing something, it’s because you were doing something wrong or at least against standard practice. Am I ok doing this, or will it mess up something in the remote branch or create a hassle for whoever has to eventually merge my stuff into dev?

The -f is actually required because of the rebase. Whenever you do a rebase you would need to do a force push because the remote branch cannot be fast-forwarded to your commit. You’d always want to make sure that you do a pull before pushing, but if you don’t like to force push to master or dev for that matter, you can create a new branch to push to and then merge or make a PR.

*"The tip of your current branch is behind its remote counterpart"* means that there have been changes on the remote branch that you don’t have locally. And Git tells you to import new changes from REMOTE and merge it with your code and then push it to remote.

You can use this command to force changes to the server with the local repository (). remote repo code will be replaced with your local repo code.

With the -f tag you will override the remote branch code with your local repo code.

If you want to avoid having to use -f, then you can use just

The non-rebase will fetch the changes from origin/dev and merge them into your FixForBug branch. Then, you will be able to run

We can force changes to GitHub using our local repository with the following cmd:

The command I used with Azure DevOps when I encountered the message “updates were rejected because the tip of your current branch is behind” was/is this command:

(or can start with a new folder and do a clone)…

This answer doesn’t address the question posed, specifically, Keif has answered this, but it does answer the question’s title/heading text and this will be a common question for Azure DevOps users.

I noted comment: “You’d always want to make sure that you do a pull before pushing” in the answer from Keif!

I have also used Git GUI tool in addition to the Git command line tool.

A diagram that shows the various Git commands for various actions that you might want to undertake is this one:

It must be because of the commit is ahead of your current push.

This is how I solved my problem:

You already have, let’s say, about four commits and you are getting Updates were rejected because the tip of your current branch is behind.

Here is what I did

First, squash all your four commits:

You’ll get a list of commits with pick written on them (opened in an editor).

After that, you can save your combined commit

You’ll need to stash your commit.

Now rebase with your upstream branch:

Commit these changes and push them:

This just happened to me.

Solution: Pull down my own branch so I get that extra commit. Then push it back to my remote branch.

On my branch I literally did:

If you use TortoiseGit push dialogue 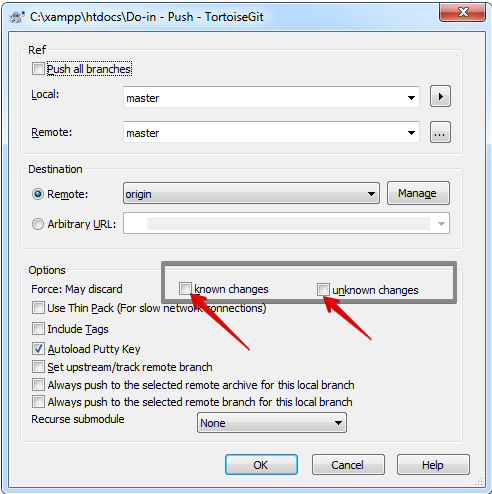 known changes – This allows remote repository to
accept a safer non-fast-forward push. This can cause the remote
repository to lose commits; use it with care. This can prevent from
losing unknown changes from other people on the remote. It checks if
the server branch points to the same commit as the remote-tracking
branch (known changes). If yes, a force push will be performed.
Otherwise it will be rejected. Since git does not have remote-tracking
tags, tags cannot be overwritten using this option. This passes
–force-with-lease option of git push command.

unknown changes – This allows remote repository to
accept an unsafe non-fast-forward push. This can cause the remote
repository to lose commits; use it with care. This does not check any
server commits, so it is possible to lose unknown changes on the
remote. Use this option with Include Tags to overwrite tags. This
passes the traditional –force option of git push command.

You must have added new files in your commits which has not been pushed. Check the file, push that file again, and then try pull / push.

It will work. This worked for me…

If you tried all of the previous answers and the problem is still not solved, then make sure that the pushed branch name is unique and does not exist in remotes.

Since the branch I was trying to commit was my sub branch under master, I deleted it first from the repository (due to a back referencing issue). I then retried with push and it worked again!

Note: As part of deleting the initial branch, I had all the previous changes in the push I was about to do so no code were lost.

It depends on the permissions.

You may not have permission to push directly to a main branch (master, development). If you are in an enterprise project, you should push your own topic branch to its remote and submit a merge request (MR).

In my case, the remote repository already had a branch with the same name as the dev branch that I was working on. I just renamed the branch and pushed the code. It worked for me.

If you are really worried about any other approaches, these Steps can help you without any difficutly

1: Stash your changes in your Local Branch that you want to Push

2: Rename Your Local Branch as your Backup for future

3: Create a Branch of the Same name From your Remote that will have all the changes

4: Check out this new Branch as your New Local Branch

5: Make and Save the Changes in this Branch

The push were rejected because the tip of your current branch is behind.

When I had such a situation, I just ran:

And it was done.

Respondent: SHADRACH CHIGOZIE MADUAKO
The answers/resolutions are collected from stackoverflow, are licensed under cc by-sa 2.5 , cc by-sa 3.0 and cc by-sa 4.0 .

[Solved] How do I install command line MySQL client on mac?
[Solved] Python “SyntaxError: Non-ASCII character ‘xe2’ in file” [duplicate]
To Top
India and Pakistan’s steroid-soaked rhetoric over Kashmir will come back to haunt them both clenbuterol australia bossier man pleads guilty for leadership role in anabolic steriod distribution conspiracy