Could not install the app on the device, read the error above for details.
Make sure you have an Android emulator running or a device connected and have
set up your Android development environment:
https://facebook.github.io/react-native/docs/android-setup.html

I look at my devices

Since you are using Mi phone which has MIUI

go to Developer options, scroll down to find ‘Turn on MIUI optimization’ & disable it. Your Phone will be rebooted

If you are using any other android phone, which has a custom skin/UI on top of android OS, then try disabling the optimization provided by that UI and check.
(usually you can find that in ‘Developer options’)

In my case, I have set up a new app but I was getting errors, tried many possible ways and answers from github and stackoverflow.
nothing worked

The solution for me was .. check if you already have an app with the same name is installed in android..

I had this issue. Mine worked on the emulator well but it didn’t work on the device and the error was

If you have a different app with the same name (or package name) on the device:
Rename the app or delete it from your device.

on my android device, the problem was about the previous build versions of the application that I had installed on my phone before.
the following steps solved my problem:

hope this help you too.

This works for me

I got the same problem and did some research. This problem happens a lot on Chinese android phones.

It was solved by change the gradle version to 1.2.3 in file android/build.gradle line 8

In my case (with React Native), my Android phone was unrecognized by my PC where I was running the server, which can be seen by the message:

If that is the case, as highlighted in ADB Android Device Unauthorized, make sure that in Developer Options on your phone USB Debugging is set to true, and enter the following commands in terminal or cmd to restart the Android server.

In my case, I had the app downloaded from PlayStore and I was trying to debug the APK with the same name. I just uninstalled the app and debugged successfully.

I also got troubles with app using gradle 2.14, though with gradle 4 it’s ok. By using –deviceID flag app instals without any issue.

I had this problem and I removed the apk file from my android device/emulator and then run react-native run-android and run successfuly .

On MIUI , inside developer option by default “Install via USB” is disabled.Enable it and than it allows installing app via usb.

I couldn’t get it to work with a hardware device. I kept getting the same error, but…

For your emulator you have to choose the IntelX86 Atom System image. Then ADB will connect to your emulator and it will properly install the installDebug.apk.

This is what I had to do.

Also look at this tutorial. It helped me immensely.

Previously, I had installed npm and then installed yarn, and that is when I started to have problems compiling, even when creating new projects with react-native init . Uninstalling yarn, I was able to create and compile.

In my case, I did not have enough space on my device to install the app,
so I cleared up some space and tried again

For me, restarting my phone did the trick.

I had the same issue with wrong AVD settings.
Probably, “Target Android 6.0” was wrong choice.

see the detail information about this here:
RN Android Setup

Just lock and unlock the android solved my issue then

I got the same error but the issue was I did on the USB Debugging after unable this is working for me.

Just go to the Developer option in your phone and disable and again enable usb debugging. It will work.

In my case, I manually delete the app-debug.apk file and run it again.

As you add more modules to Android, there is an incredible demand placed on the Android build system, and the default memory settings will not work. To avoid OutOfMemory errors during Android builds, you should uncomment the alternate Gradle memory setting present in /android/gradle.properties:

In my case, It is problem of permissions or we can say that setting problem present inside developer options. I am using MI Note 10.To avoid this issue,permit some setting such as common one developer option and USB debugging as well as Install via USB,USB debugging(Security settings), Verify apps over USB. 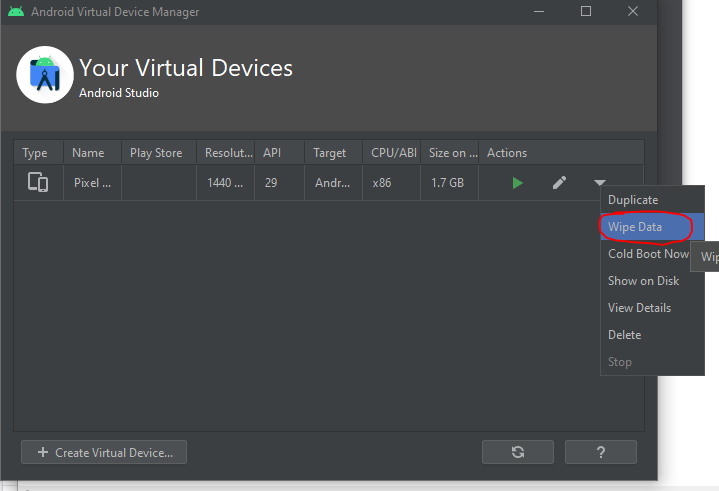 Step 3: Open your terminal and type

Note: If you are using yarn, just run:

Respondent: Hai Dinh
The answers/resolutions are collected from stackoverflow, are licensed under cc by-sa 2.5 , cc by-sa 3.0 and cc by-sa 4.0 .