I am using the following setup

I want to use linting to make my life a bit easier in Visual Studio Code. However, for every import I have states “unresolved import”. Even on default Django imports (i.e. from django.db import models).

I presume it is because it is not seeing the virtual environment Python files.

Everything works just fine, but it’s starting to get annoying.

The interpreter choices I have are all system versions of Python. It does not seem to see my virtual environment Python at all (it is not in the same directory as my workspace, so that part makes sense).

If I set up the python.PythonPath in the settings.json file, it just ignores it and does not list my virtual environment path as an option. I also tried setting it up in my global Python settings, but it also does not show up.

Is there a quick fix to get it working?

In your workspace settings, you can set your Python path like this:

The accepted answer won’t fix the error when importing own modules.

Use the following setting in your workspace settings .vscode/settings.json:

Alternative way: use the command interface!

Cmd/Ctrl + Shift + P ? Python: Select Interpreter ? choose the one with the packages you look for:

This issue has already been opened on GitHub:

There are two very useful answers, by MagnuesBrzenk and SpenHouet.

The best solution for now is to create a .env file in your project root folder. Then add a PYTHONPATH to it like this:

And in your settings.json add:

If you have this code in your settings.json file, delete it:

When I do > reload window that fixes it.

I was able to resolved this by enabling jedi in .vscodesettings.json

If you are more visual like myself, you can use the Visual Studio Code configurations in menu File ? Preferences ? Settings (Ctrl + ,). Go to Extensions ? Python.

In the section Analysis: Disabled, add the suppression of the following message: unresolved-import: 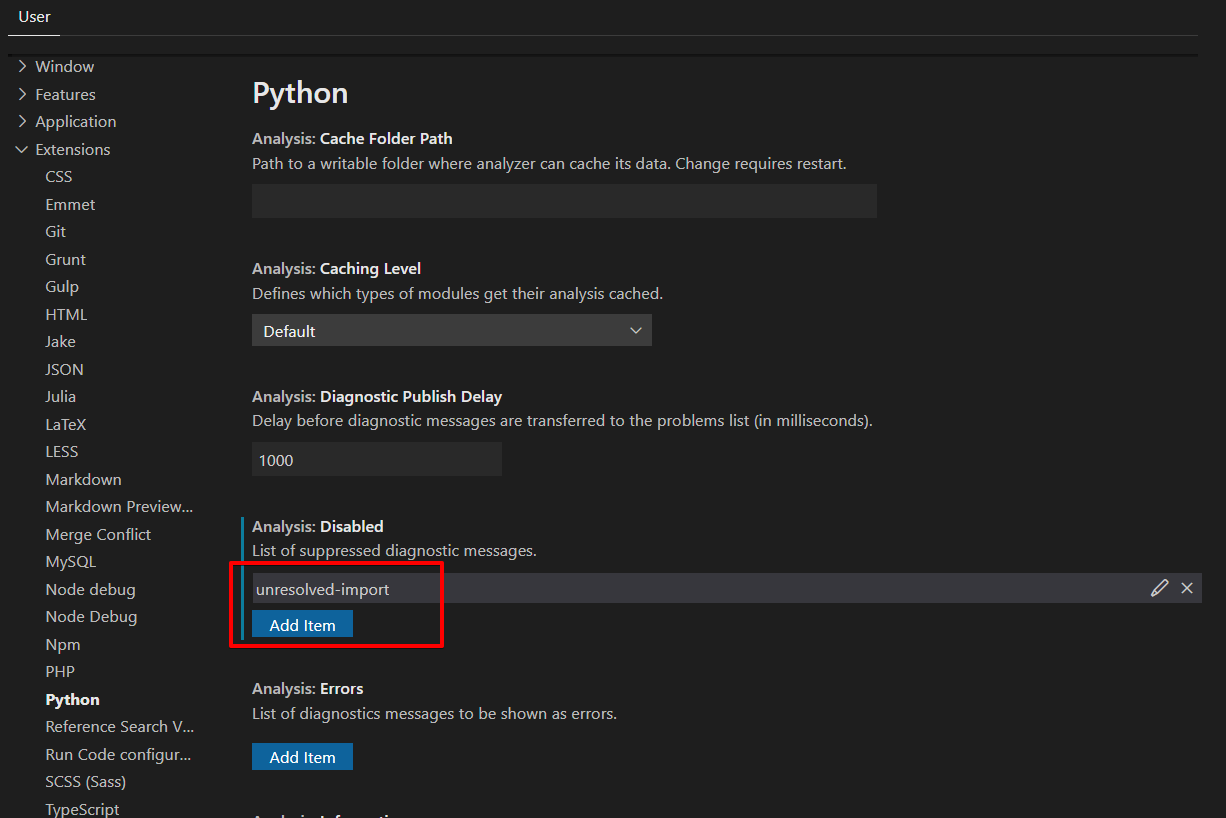 You need to select the interpreter associated with the virtual environment. 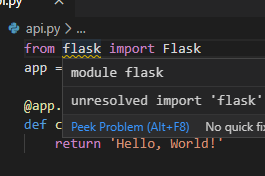 And just select the virtual environment you are working with. Done.

Sometimes, even with the interpreter selected, it won’t work. Just repeat the process again and it should solve it. 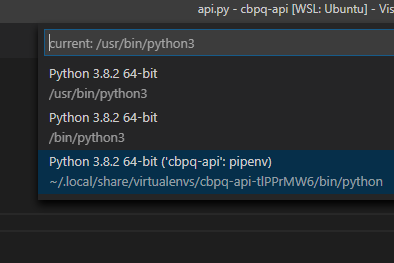 None of the solutions worked except this one. Replacing “Pylance” or “Microsoft” in the settings.json solved mine.

I wonder how many solutions this problem have (or have not), I tried most of the above, nothing worked, the only solution that worked is to set the python language server to Jedi, instead of Microsoft in the settings.json file:

None of the previous answers worked for me. Adding both of the lines below to my settings.json file did, however.

The first line really just hides the linting error. Certainly not a permanent solution, but de-clutters the screen.

Maybe someone who understands Python more than me can explain that one more.

This solution is only for the current project.

To me the problem was related with the project that I was working on. It took me a while to figure it out, so I hope this helps:

This didn’t trigger the intellisense in Visual Studio Code, but it did execute OK.

On the other hand, adding “root” on the import path, did make the intellisense work, but raised ModuleNotFoundError when executing:

The solution from Shinebayar G worked, but this other one is a little bit more elegant:

Given the following example project structure:

What I did to resolve this issue:

None of the answers here solved this error for me. Code would run, but I could not jump directly to function definitions. It was only for certain local packages. For one thing, python.jediEnabled is no longer a valid option. I did two things, but I am not sure the first was necessary:

Apparently the root and src will be checked for local packages, but others must be added here.

This works for me:

Doing this, you set the Python interpreter in Visual Studio Code.

That happens because Visual Studio Code considers your current folder as the main folder, instead of considering the actual main folder.

The quick way to fix is it provide the interpreter path to the main folder.

Select the path where you installed Python in from the options available.

Changing
Python:Language Server
to ‘Jedi’ worked for me.
It was ‘Windows’ initially.

I was facing the same problem while importing the project-related(non standard) modules.
Detailed explanation of the problem

Here “import a” and “import y” fails with following error:

What worked for me:

Appending the top directory which contains the modules to be imported.

In above example add the follwoing “Code to append” in “.vscode/settings.json”

I have a different solution: my Visual Studio Code instance had picked up the virtualenv stored in .venv, but it was using the wrong Python binary. It was using .venv/bin/python3.7; using the switcher in the blue status bar.

I changed it to use .venv/bin/python and all of my imports were resolved correctly.

I don’t know what Visual Studio Code is doing behind the scenes when I do this, nor do I understand why this was causing my problem, but for me this was a slightly simpler solution than editing my workspace settings.

In case of a Pylint error, install the following

Then create a file, .pylintrc, in the root folder and write the following

I have faced this problem in three ways. Although for each of them a solution is available in the answers to this question, I just thought to put it all together.

If you are using pipenv then you need to specify the path to your virtual environment.in settings.json file.
For example :

For me, it worked, if I setup the paths for python, pylint and autopep8 to the local environment paths.

For your workspace add/change this:

Save and restart VS Code with workspace.
Done!

First of all open visual studio code settings in json and add following arguments after "[python]":{}

This has solved my issue with pylint

And add the line "python.pythonPath": "/usr/bin/"

Keep other configuration lines if they are present.
This should import all modules that you have installed using PIP for autocomplete.

My solution was to open Visual Studio Code in a previous directory.

In my case I already had a Conda environment activated, but I still wanted local Python modules to be available for autocomplete, peeking definition, etc.

I tried many solutions such as adding a list of Python paths etc., but what finally solved it for me was to create a symbolic link from Conda’s lib/python{your version}/site-packages to my local module.

I have one library which errs out when trying to include it using the Jedi language service and works fine without it (i.e. the C# one).

The library is jsonslicer and it does depend on an external C library I installed into /usr/local/lib. Could that have something to do with it?

I installed the Jedi service and the library in my Conda environment and used that environment within Visual Studio. It works fine at runtime and in my terminal, but not when checking for problems in my source files and it shows up as an error.

Respondent: richtera
The answers/resolutions are collected from stackoverflow, are licensed under cc by-sa 2.5 , cc by-sa 3.0 and cc by-sa 4.0 .