I’m using Eclipse Helios on Ubuntu 10.04, and I’m trying to install CDT plugin on it. I download it from here here.

And then I create a new HelloWorld project. And when I try to run it, it shows an error and says:

Can anyone explain me how to fix it?

You must build an executable file before you can run it. So if you don’t “BUILD” your file, then it will not be able to link and load that object file, and hence it does not have the required binary numbers to execute.

First you need to make sure that the project has been built. You can build a project with the hammer icon in the toolbar. You can choose to build either a Debug or Release version. If you cannot build the project then the problem is that you either don’t have a compiler installed or that the IDE does not find the compiler.

To see if you have a compiler installed in a Mac you can run the following command from the command line:

If you have it already installed (it gets installed when you install the XCode tools) you can see its location running:

If you were able to build the project but you still get the “binary not found” message then the issue might be that a default launch configuration is not being created for the project. In that case do this:

Then create a new configuration under the “C/C++ Application” section > Enter the full path to the executable file (the file that was created in the build step and that will exist in either the Debug or Release folder). Your launch configuration should look like this: 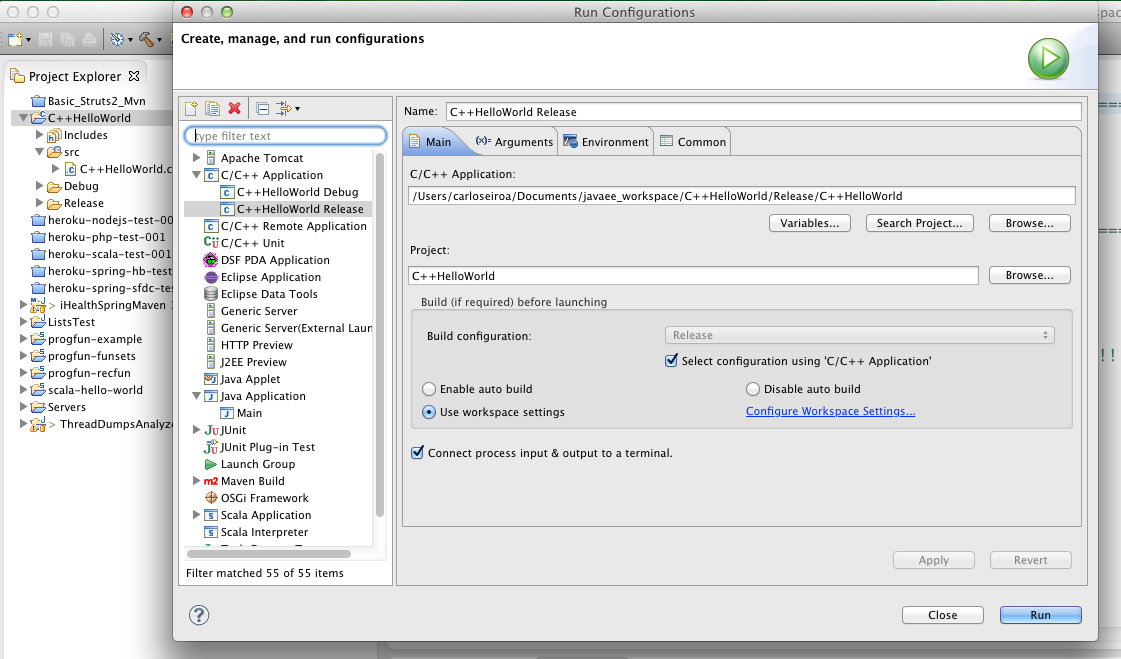 Go to the Run->Run Configuration-> now

Under this in main Tab -> C/C++ application -> Search your project -> in binaries select your binary titled by your project….

You must “build” before “run”, otherwise “Binary not found”. You can set up “Auto build”, so that it will build and run. Check this post to set up “Auto build” http://situee.blogspot.com/2012/08/how-to-set-eclipse-cdt-auto-build.html

I had this problem for a long while and I couldn’t figure out the answer. I had added all the paths, built everything and pretty much followed what everyone on here had suggested, but no luck.

Finally I read the comments and saw that there were some compilation errors that were aborting the procedure before the binaries and exe file was generated.

Bottom line: Do a code review and make sure that there are no errors in your code because sometimes eclipse will not always catch everything.

If you can run a basic hello world but not your code then obviously something is wrong with your code. I learned the hard way.

If you still have an error even after building the project then try to do this:

I was having this same problem and found the solution in the anwser to another question:
https://stackoverflow.com/a/1951132/425749

Basically, installing CDT does not install a compiler, and Eclipse’s error messages are not explicit about this.

I faced the same problem. I have Eclipse Indigo and Eclipse Luna on Ubuntu. I tried many solutions, but none worked. Here’s how you can try 🙂
Try it in order 🙂

After 1,2, 3, and 4, I tried changing paths, and other stuff, but nothing worked. In the end, I noticed that it mentioned Debug Active was not configured. So when I changed it to Release Active, it worked. Do note that change in environment and path is not required.

I faced the same problem while installing Eclipse for c/c++ applications .I downloaded Mingw GCC ,put its bin folder in your path ,used it in toolchains while making new C++ project in Eclipse and build which solved my problem.
Referred to this video

Seems like having “Build Automatically” under the Project menu ought to take care of all of this. It does for Java.

make sure you have GDB installed on your system…

If your using Linux based OS simply in a terminal type:

when finished downloading extract the file and install.

close your IDE (in this case eclipse and open it again and run your project.

Adding the compiler to the PATH fixed the problem for me…

My problem was the same as one commenter above. I had to change the binary parser to the correct one (PE for windows, ELF for Linux, mach for mac)

Respondent: cmperezg
The answers/resolutions are collected from stackoverflow, are licensed under cc by-sa 2.5 , cc by-sa 3.0 and cc by-sa 4.0 .

[Solved] glm rotate usage in Opengl
[Solved] TypeError: tuple indices must be integers, not str
To Top
India and Pakistan’s steroid-soaked rhetoric over Kashmir will come back to haunt them both clenbuterol australia bossier man pleads guilty for leadership role in anabolic steriod distribution conspiracy