This answer of @Dunes states, that due to pipeline-ing there is (almost) no difference between floating-point multiplication and division. However, from my expience with other languages I would expect the division to be slower.

My small test looks as follows:

For different commands and size=1e8 I get the following times on my machine:

The most interesting part: dividing by 0.5 is almost twice as fast as dividing by 0.51. One could assume, it is due to some smart optimization, e.g. replacing division by A+A. However the timings of A*2 and A+A are too far off to support this claim.

In general, the division by floats with values (1/2)^n is faster:

It gets even more interesting, if we look at size=1e4:

Now, there is no difference between division by .5 and by .51!

I tried it out for different numpy versions and different machines. On some machines (e.g. Intel Xeon E5-2620) one can see this effect, but not on some other machines – and this does not depend on the numpy version.

With the script of @Ralph Versteegen (see his great answer!) I get the following results: 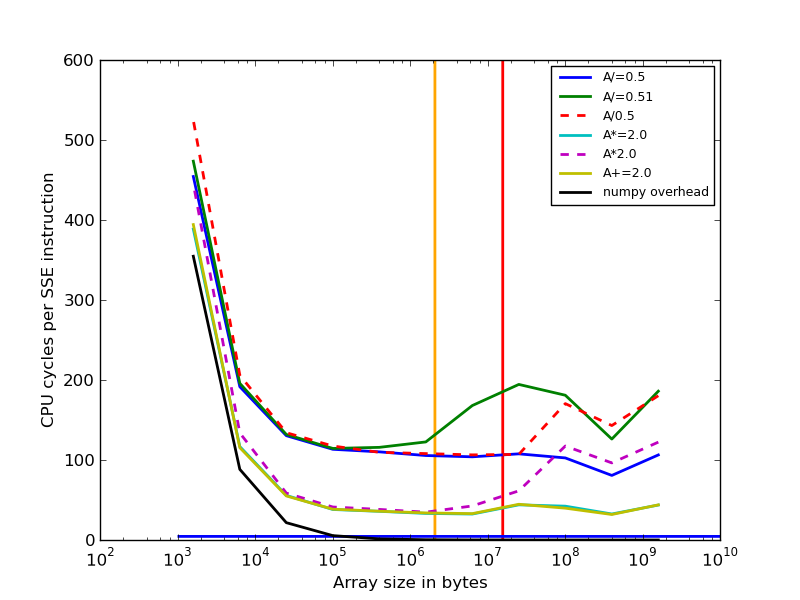 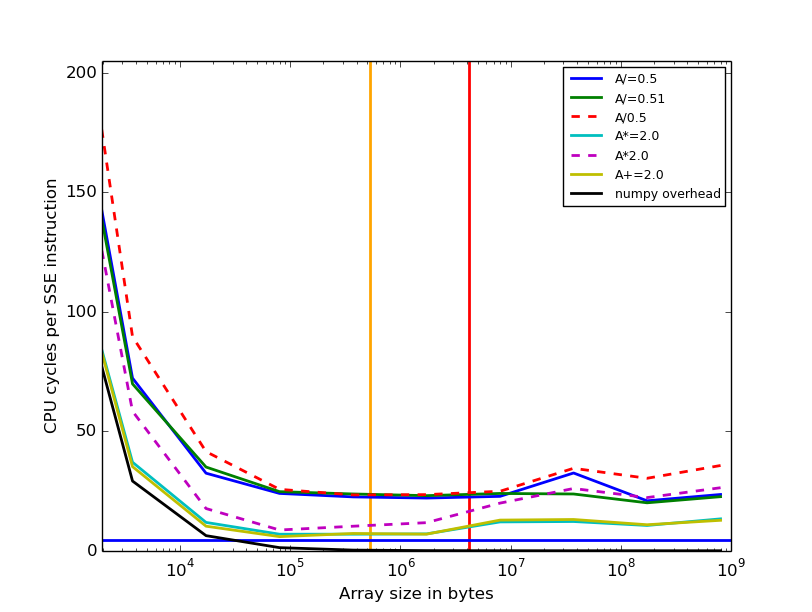 The question is: What is the reason for higher cost of the division by 0.51 compared to division by 0.5 for some processors, if the array sizes are large (>10^6).

The @nneonneo’s answer states, that for some intel processors there is an optimization when divided by powers of two, but this does not explain, why we can see the benefit of it only for large arrays.

Here also, my original testing script, which produced the timings:

At first I suspected that numpy is invoking BLAS, but at least on my machine (python 2.7.13, numpy 1.11.2, OpenBLAS), it doesn’t, as a quick check with gdb reveals:

In fact, numpy is running exactly the same generic loop regardless of the constant used. So all timing differences are purely due to the CPU.

Actually, division is an instruction with a highly variable execution time. The amount of work to be done depends on the bit patterns of the operands, and special cases can also be detected and sped up. According to these tables (whose accuracy I do not know), on your E5-2620 (a Sandy Bridge) DIVPD has a latency and an inverse throughput of 10-22 cycles, and MULPS has latency 10 cycles and inverse throughput of 5 cycles.

Now, as for A*2.0 being slower than A*=2.0. gdb shows that exactly the same function is being used for multiplication, except now the output op differs from first input ip1. So it has to be purely an artifact of the extra memory being drawn into cache slowing down the non-inplace operation for the large input (even though MULPS is producing only 2*8/5 = 3.2 bytes of output per cycle!). When using the 1e4-sized buffers, everything fits in cache, so that doesn’t have a significant effect, and other overheads mostly drown out the difference between A/=0.5 and A/=0.51.

Still, there are lots of weird effects in those timings, so I plotted some a graph (code to generate this is below) 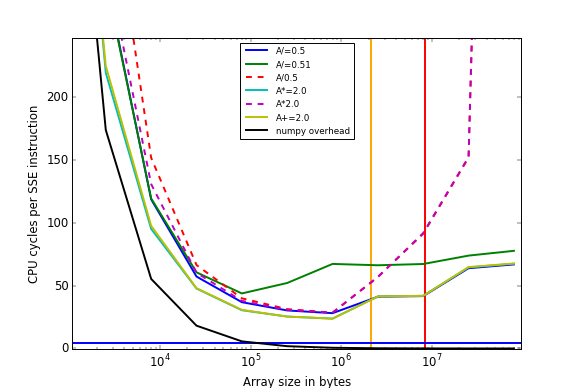 I’ve plotted size of the A array against the number of CPU cycles per DIVPD/MULPD/ADDPD instruction. I ran this on a 3.3GHz AMD FX-6100. Yellow and red vertical lines are L2 and L3 cache size. The blue line is the supposed maximum throughput of DIVPD according to those tables, 1/4.5cycles (which seems dubious). As you can see, not even A+=2.0 gets anywhere near this, even when the “Overhead” of performing an numpy operation falls close to zero. So there is about 24 cycles of overhead just looping and reading and writing 16 bytes to/from L2 cache! Pretty shocking, maybe the memory accesses aren’t aligned.

Lots of interesting effects to note:

Unfortunately, on another machine with a CPU with different FPU speed, cache size, memory bandwidth, numpy version, etc, these curves could look quite different.

Intel CPUs have special optimizations when dividing by powers of two. See, for example, http://www.agner.org/optimize/instruction_tables.pdf, where it states

Although this applies to FDIV and not DIVPD (as @RalphVersteegen’s answer notes), it would be quite surprising if DIVPD did not also implement this optimization.

Division is normally a very slow affair. However, a division by a power of two is just an exponent shift, and the mantissa usually doesn’t need to change. This makes the operation very fast. Furthermore, it’s easy to detect a power of two in floating-point representation as the mantissa will be all zeros (with an implicit leading 1), so this optimization is both easy to test for and cheap to implement.

How to update manytomany field in Django?
SQLAlchemy – what is declarative_base
To Top
India and Pakistan’s steroid-soaked rhetoric over Kashmir will come back to haunt them both clenbuterol australia bossier man pleads guilty for leadership role in anabolic steriod distribution conspiracy