How to run Spyder in virtual environment?

I have been using Spyder installed with with Anaconda distribution which uses Python 2.7 as default. Currently I need to set up a development virtual environment with Python 3.4.

Both recommendations are cumbersome and do not look like smart options for development.

Is there a solution that would allow to run Spyder with required Python version automatically after activating the required virtual environment?

Here is a quick way to do it in 2021 using the Anaconda Navigator. This is the most reliable way to do it, unless you want to create environments programmatically which I don’t think is the case for most users: 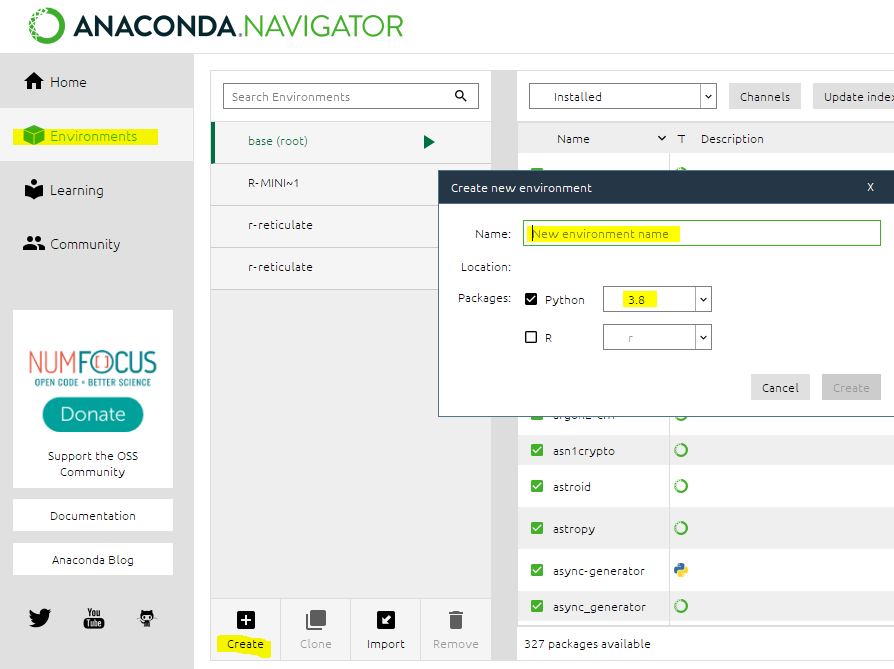 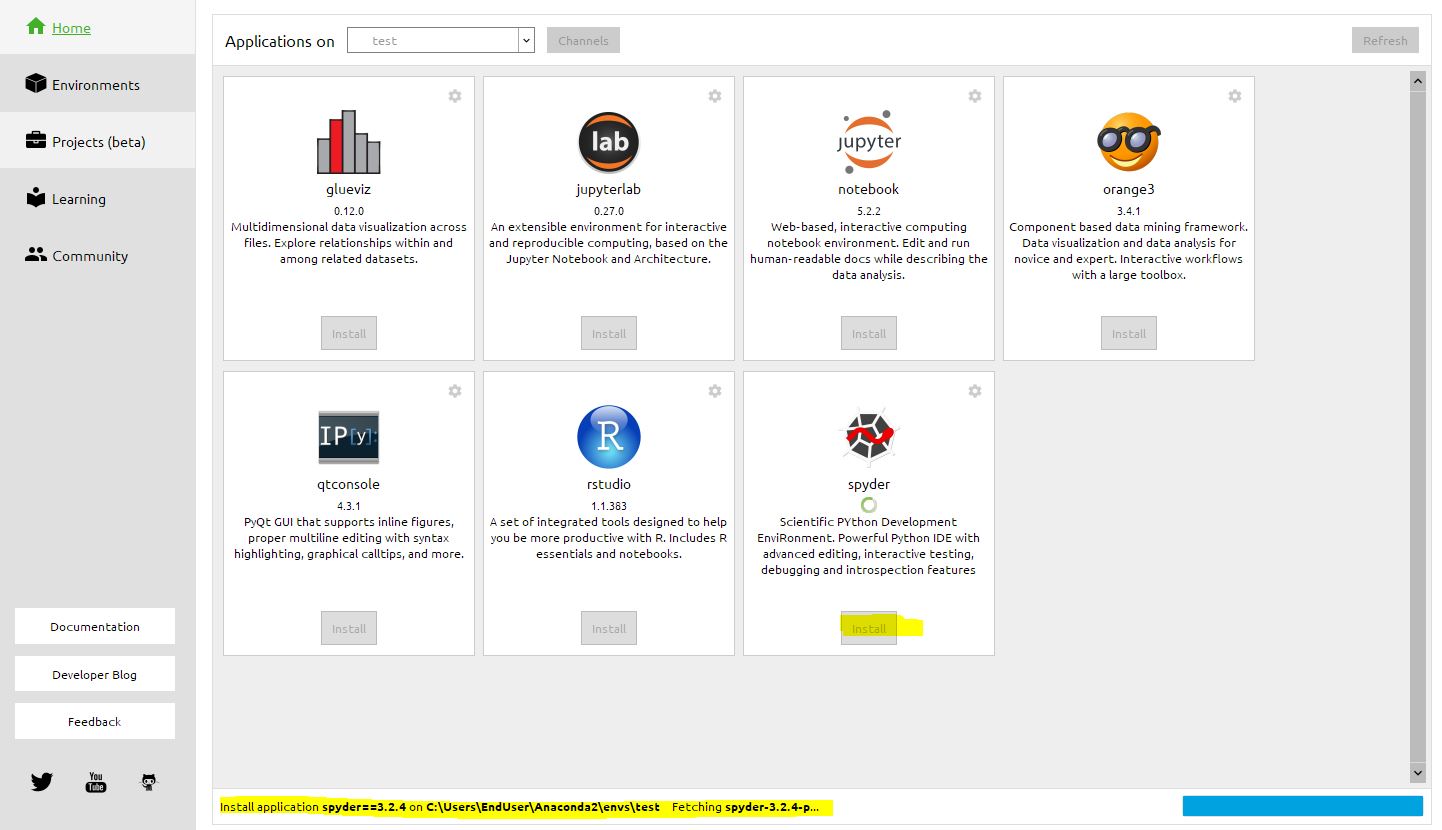 There are still a few minor bugs when setting up your environment, most of them should be solved by restarting the Navigator.

If you find a bug, please help us posting it in the Anaconda Issues bug-tracker too! If you run into trouble creating the environment or if the environment was not correctly created you can double check what got installed: Clicking the “Environments” opens a management window showing installed packages. Search and select Spyder-related packages and then click on “Apply” to install them. 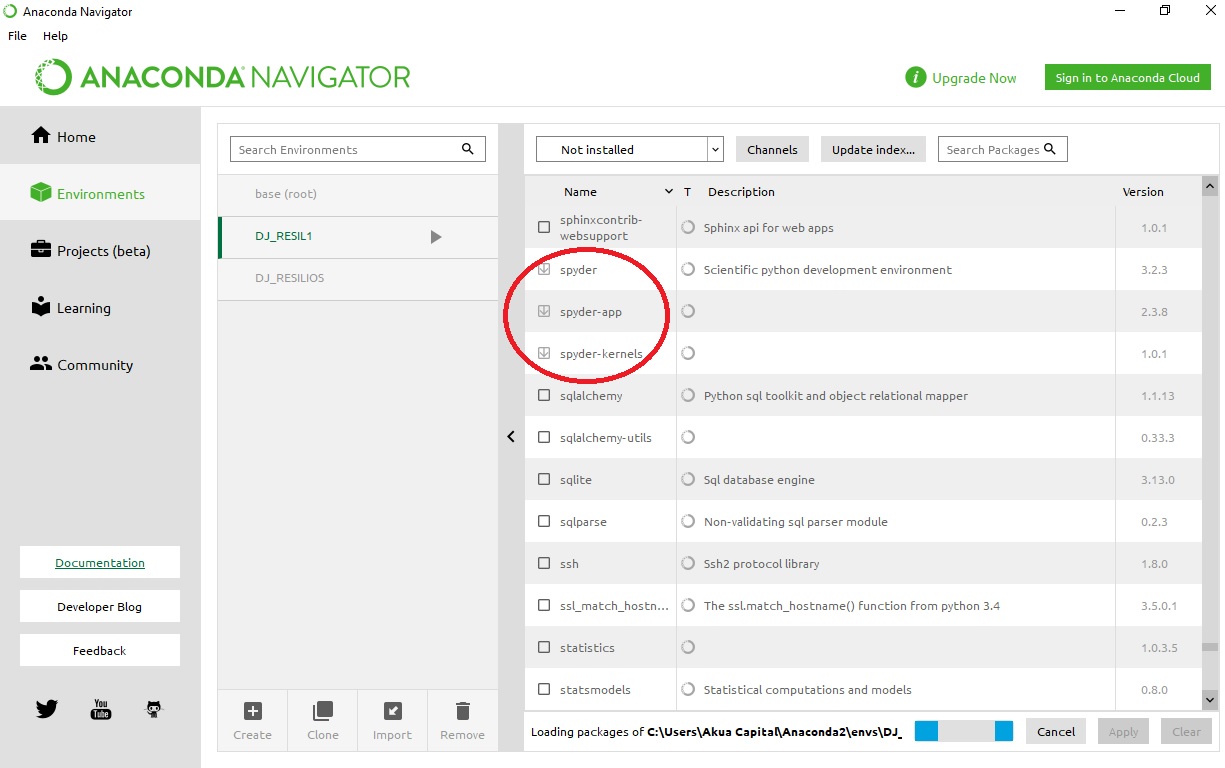 There is an option to create virtual environments in Anaconda with required Python version.

(I have also tested the installation with pip, but for Python 3.4 or older versions, it breaks with the library dependencies error that requires manual installation.)

And now to run Spyder with Python 3.4 just type: 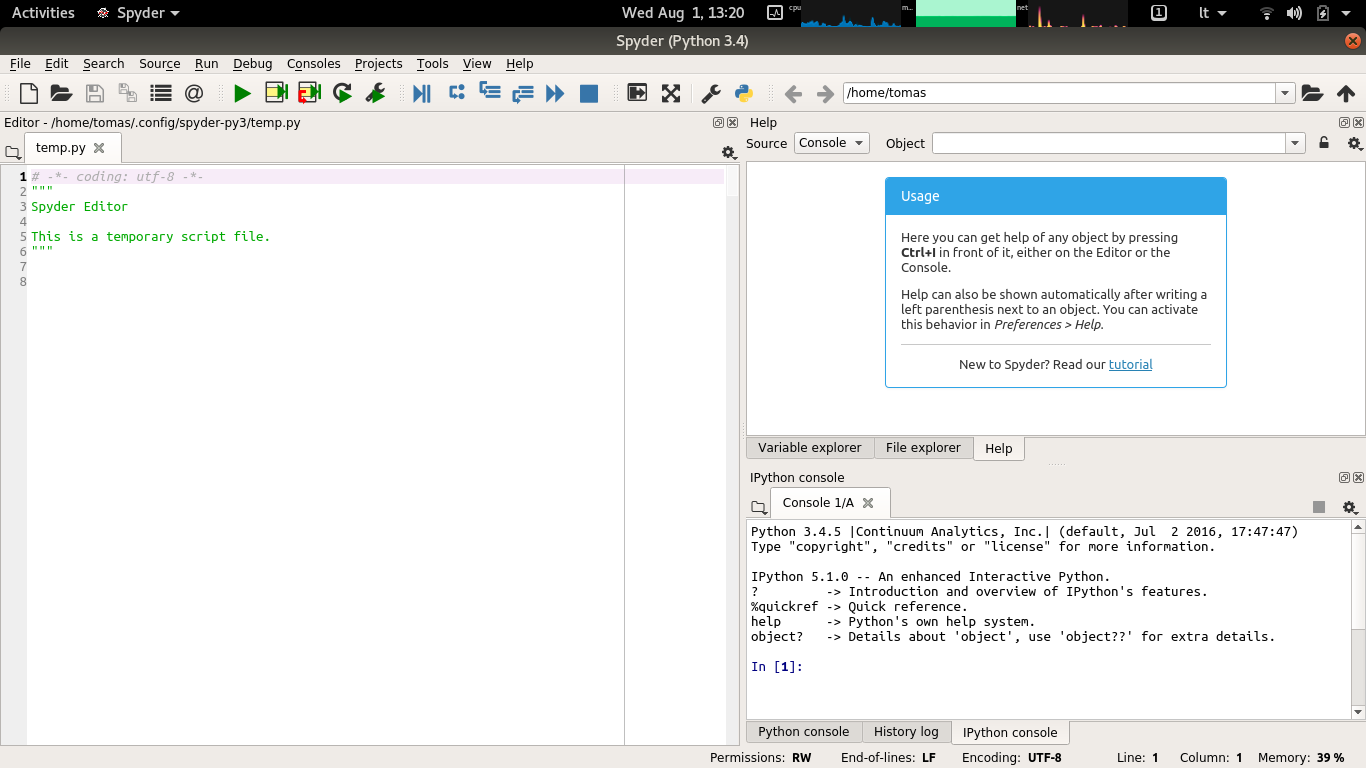 EDIT from a reader:

For a normal opening, use “Anaconda Prompt” > activate myenv > spyder (then the “Anaconda Prompt” must stay open, you cannot use it for other commands, and a force-close will shut down Spyder). This is of course faster than the long load of “Anaconda Navigator” > switch environment > launch Spyder (@adelriosantiago’s answer).

What worked for me :

Additional to tomaskazemekas’s answer: you should install spyder in that virtual environment by:

(on Windows, for Linux or MacOS, you can search for similar commands)

To do without reinstalling spyder in all environments follow official reference here.

In summary (tested with conda):

From the system prompt:

PS: in spyder you should see at the bottom something like this

I just had the same problem trying to get Spyder to run in Virtual Environment.

The solution is simple:

Then pip install Spyder and its dependencies (PyQt5) in your virtual environment.

Then launch Spyder3 from your virtual environment CLI.

It works fine for me now.

The above answers are correct but I calling spyder within my virtualenv would still use my PATH to look up the version of spyder in my default anaconda env. I found this answer which gave the following workaround:

I chose this over modifying PATH or adding a link to the executable at a higher priority in PATH since I felt this was less likely to break other programs. However, I did add an alias to the executable in ~/.bash_aliases.

You can create a shortcut executing

However, if you started spyder from your venv inside Anaconda shell, it creates this shortcut for you automatically in the Windows menu. The steps:

Now you can directly start spyder from a shortcut without the need to open anaconda prompt.

From Spyder official page on Github:

To use Spyder with another environment, the simplest way is to just
install it directly into the environment from which you’d like to use
the packages in, and run it from there. This works with all Spyder
versions and should require no extra configuration once the IDE is
installed; however, it results in multiple installations to manage and
isn’t as flexible or configurable as the alternative. Therefore, when
dealing with multiple environments, we recommend the modular
approach.

Starting with Spyder 3.3.1, you can install the modular
spyder-kernels package into any Python environment (conda
environment, virtualenv/venv, system Python, WinPython, etc) in
which you wish to work, and then change the Python interpreter used by
Spyder on its IPython consoles to point to the Python executable of
that environment.

This takes a small amount of preparation and configuration, but is
much “lighter” and quicker than a full Spyder installation into that
environment, avoids dependency conflicts, and opens up new workflow
possibilities.

1- Activate the environment (e.g. myenv) in which you’d like to work (e.g. with conda activate myenv for conda, source myenv/bin/activate or workon myenv for virtualenv/venv, etc)

2- Install the spyder-kernels package there, with the command:

5- After installing via either method, run the following command inside the same environment:

and copy the path returned by that command (it should end in
python, pythonw, python.exe or pythonw.exe, depending on your
operating system).

6- Deactivate that environment, activate the one in which Spyder is installed (if you’ve installed it in its own environment) and start
Spyder as you normally would.

7- After Spyder has started, navigate to Preferences > Python Interpreter > Use the following interpreter and paste the path from
Step 3 into the text box.

8- Start a new IPython console. All packages installed in your myenv environment should be available there. If conda is used, the
name of the current environment and its Python version should be
displayed in Spyder’s status bar, and hovering over it should display
the path of the selected interpreter.

I follow one of the advice above and indeed it works. In summary while you download Anaconda on Ubuntu using the advice given above can help you to ‘create’ environments. The default when you download Spyder in my case is: (base) [email protected] ~$. After you create the environment, i.e. fenics and activate it with $ conda activate fenics the prompt change to (fenics) [email protected] ~$. Then you launch Spyder from this prompt, i.e $ spyder and your system open the Spyder IDE, and you can write fenics code on it. Remember every time you open a terminal your system open the default prompt. You have to activate your environment where your package is and the prompt change to it i.e. (fenics).

For me below worked:

Open Anaconda, setup new environment, then select the env and click on play icon as shown below: 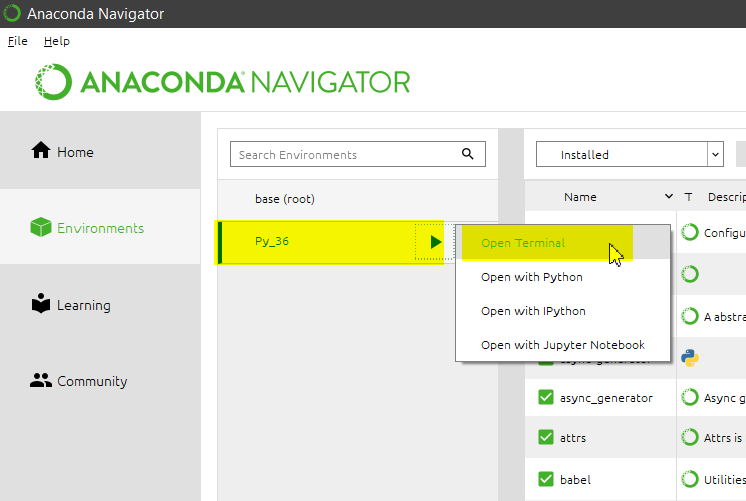 Then click on Open Terminal, and type “spyder” in terminal, it will open the spyder with selected env.

Note: For me directly opening Sypder from Home page was always opening with base env.