While running Linux versions of python, pip etc. “natively” on windows is amazing, I’d like to do so using a proper IDE. Since SSHD compatibility has not been implemented yet, I’m trying get PyCharm to recognize Linux python as a local interpreter.

from the windows command line will drop you into a python shell.

works as well, producing “hello world” as output in the windows shell!

I’m trying to wrap this up as a .bat file and present it to PyCharm as a local interpreter, i.e.

But I keep getting “the sdk seems invalid” for any variation I try. Since I’m not sure exactly what PyCharm is doing to “validate” the SDK, this is hard to overcome.

PyCharm can only be configured to use WSL Python as a Remote Interpreter (this is due to lack of other public API).

Configuring PyCharm
PyCharm should be configured to use WSL as a remote interpreter but without deployment, since each drive on Windows is mapped to an appropriate folder in /mnt/<DRIVE_NAME> in WSL. So, you only need to configure the mapping. For remote interpreters, see configuration-remote-python-interpreters . You should use 127.0.0.1 as hostname, and login and password you entered after first lxrun /install. You also should set C:\ to /mnt/c/ in your mappings. See the video from the previous post.

I tried working with most solutions but the main issue is that I can’t downgrade OpenSSH on Windows to something below 7.5 as is recommended by JetBrains.

Luckily they have solved this issue for us!
I have downloaded the Early Access version of Pycharm 2018.3 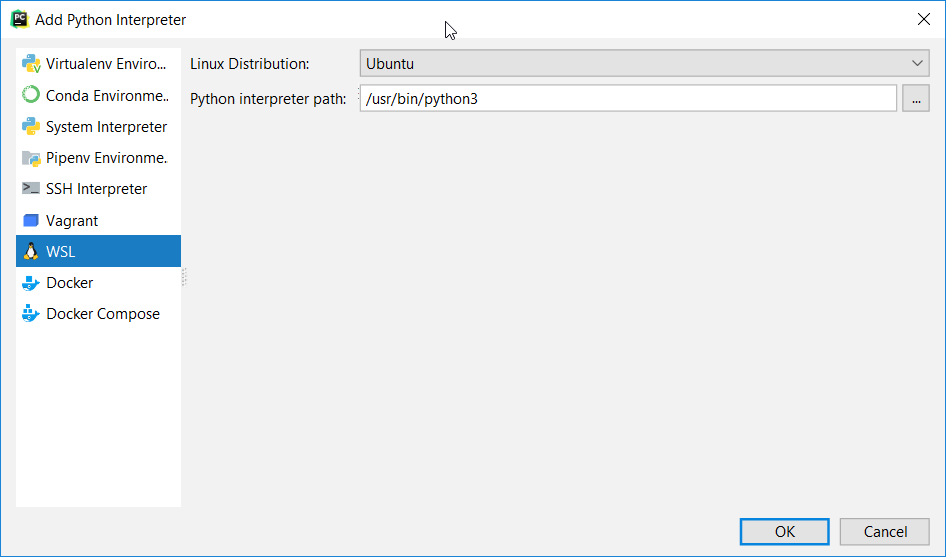 This is however only available in the professional version.

Supported only in Professional Edition

Well, I’ve managed to produce an ugly working hack.
You’ll have to install python-setuptools and pip manually under the Linux subsystem. Be sure to use the pip version provided by PyCharm, you’ll find it at a path similar to:
C:\Program Files (x86)\JetBrains\PyCharm 2016.1.2\helpers\pip-7.1.0.tar.gz

Then setup the following script as “python.bat” under “c:\Python” and point PyCharm to it as an interpreter:

You may have to tweak the directory structure to match your system. Also note that the output of any python script called by Python.bat is piped to a temp file under the linux subsystem, then typed back out under windows. For some reason, piping the output of bash.exe via windows causes errors.

Use Pyhton:
Adding a WSL interpreter

Once done, the new interpreter will be added to your project, and the default mnt mappings will be set.

Note that with WSL you cannot create virtual environments: all packages you install will be added to the corresponding system interpreter. You will be asked to enter your sudo password.

I used this guide:
critically I was getting an authentication error which was resolved with this: