Create a single executable from a Python project

I want to create a single executable from my Python project. A user should be able to download and run it without needing Python installed. If I were just distributing a package, I could use pip, wheel, and PyPI to build and distribute it, but this requires that the user has Python and knows how to install packages. What can I use to build a self-contained executable from a Python project?

Here are some common ones. I’ve included only projects that are being actively maintained as of my last edit (July 2021).

The following programs all work similarly — they bundle together Python and your program, effectively combining them to produce an executable.

Of course, that’s not the only way of doing things:

My personal preference is to use PyInstaller since it was the easiest for me to get up and running, was designed to work nicely with various popular libraries such as numpy or pygame, and has great compatibility with various OSes and Python versions.

However, I’ve also successfully built various exes using cx_Freeze without too much difficulty, so you should also consider trying that program out.

I haven’t yet had a chance to to try pynist, Nuitka, or Cython extensively, but they seem like pretty interesting and innovative solutions. If you run into trouble using the first group of programs, it might be worthwhile to try one of these three. Since they work fundamentally differently then the Pyinstaller/cx_freeze-style programs, they might succeed in those odd edge cases where the first group fails.

In particular, I think pynist is a good way of sidestepping the entire issue of distributing your code altogether: Macs and Linux already have native support for Python, and just installing Python on Windows might genuinely be the cleanest solution. (The downside is now that you need to worry about targeting multiple versions of Python + installing libraries).

Nuitka and Cython (in my limited experience) seem to work fairly well. Again, I haven’t tested them extensively myself, and so my main observation is that they seem to take much longer to produce an exe then the “freeze” style programs do.

All this being said, converting your Python program into an executable isn’t necessarily the only way of distributing your code. To learn more about what other options are available, see the following links:

pyinstaller is still under active development. You can see the latest changes on GitHub.

It has support for all three major platforms:

and it supports Python versions 2.6 and 2.7. It does not support Python 3, but there is an experimental Python 3 branch.

Better use pip install auto-py-to-exe which provides a beautiful UI with all options required to create an executable.

After installing just type auto-py-to-exe in your terminal or command prompt. 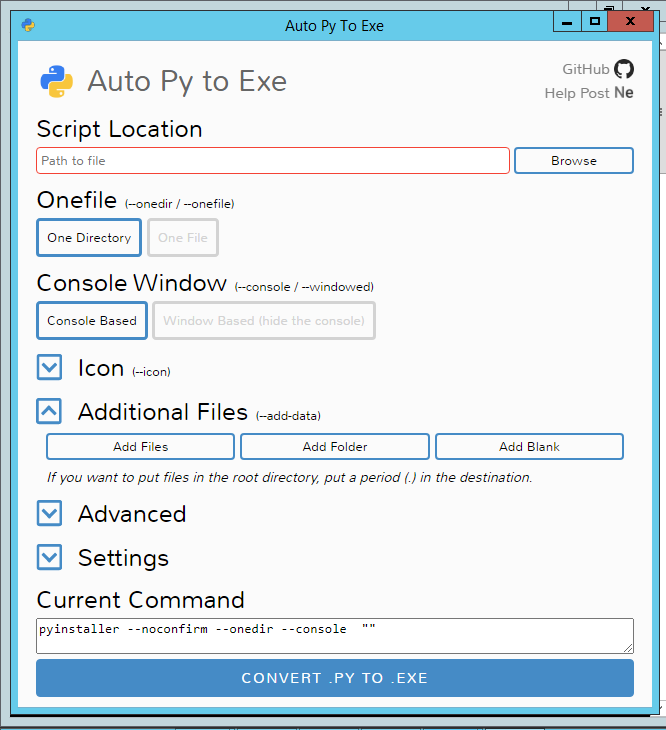